What is the ideal age to start football training? 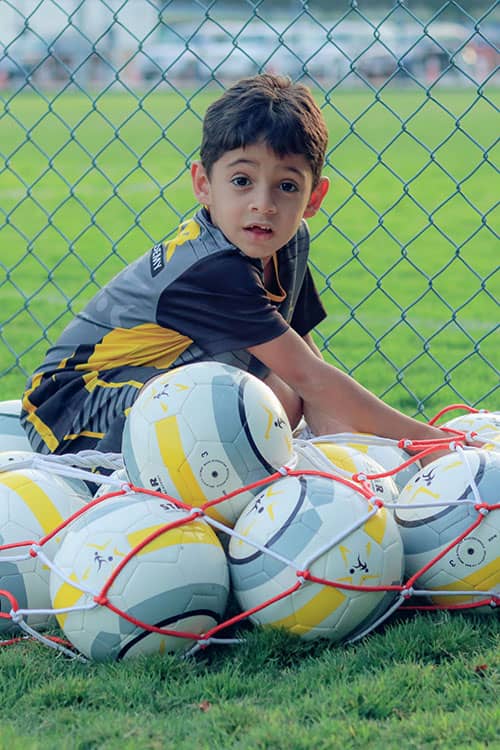 When you have a young child at home, it is common that you might want to get them playing football. Football is a brilliant team sport that encourages every person on the field to get involved. Everyone can have their moment as a protagonist. It brings us together to play a technically exciting game that can be fast-paced and thrilling. However, the low scoring nature of football also means that it can come down to one single kick of the ball to determine the whole thing. Getting your child involved in football, then, is naturally something very exciting!

If you want to get your child into football, though, it is vital that you get them involved at the right team. Start too young and they might not enjoy the process at all. Start too late, though, and they might have missed some vital development on the foundational basics of the beautiful game.

So, what is the ideal game to start football training for most youngsters?

If you intend to get your child involved with football training in Dubai, starting them at the right time could be the difference between it becoming a lifelong hobby, or even a career, or not.

When should my child first start playing football?

Really, we recommend you throw your child a football from their earliest days. Even when sitting in their baby chair, throwing them a tiny ball they can kick back to you again and again is very useful. Try and take note of the little things – like what foot do they use when they kick the ball back to you? Do they already have a favourite foot? Can they seem to naturally use both feet?

Try and get your child using a tiny little football from as young an age as possible. Even simply throwing it to their foot so they can kick it back and forth with you is a very fun way to help them build up an adolescent interest in football.

The younger you get them used to the feel of the ball, the more likely they are to see football as something they could legitimately take up as a hobby. Most players who make it say their earliest memories involve running around with a football. So, try and keep that in mind; as soon as they can kick the ball, get them started!

But what about football training at home?

Most children who are taking part in the game will be looking to get involved in football training from the ages of three to five. This is great for a child to help them start growing a little bit in terms of their movement with the ball. At such an age, expect them to be very basic with how they kick the ball or how they go about using the ball.

Make sure you let them use a ball that they can actively move and control, though. Many people give a child of this age an adult-sized ball and then wonder why they seem to just fall over all the time. Instead, starting with a smaller sized ball helps them to get used to things like dribbling, taking the ball with both feet, and simply having some fun with the ball.

When the ball feels like a big obstacle they can barely move, it is going to limit how much fun they can have. So, always look to make sure you start football training at home from around the age of 3-5 so they can build up basic skills and confidence at home.

What about football training with football coaches in Dubai?

Normally, we would recommend waiting until the age of 5+ to join any kind of team for a young child. However, any child from the age of 3 who starts to show a genuine interest and passion for moving the ball along should be encouraged to join a team.

At the youngest age groups there is obviously no tactical work going on; the kids are basically there to have to fun and to socialise. However, it is during these earliest moments that a child can be taught the kind of key technical essentials that can be lodged in muscle memory.

These factors are a big reason why you should always look to try and come up with a way to get your child training with football coaches from the age of 3-5. Alongside some little workouts at home with you as they have fun in the garden, you can find that they start to come on leaps and bounds in a short space of time.

Team training is vital, though, for a youngster to help them get used to the concept of socialising and playing with others for fun.

My child is six – has he/she missed the boat for football training?

Absolutely not! Football is littered with examples of professionals who picked the game up later on in life. In rare cases, players can pick a ball up after the age of ten and still push to become a professional. Really, the main thing to do is make sure you play with the ball enough at home – and watch enough football on TV – to get your child interested in the game. When you see them gazing at players and playing with the ball any time they can outside, it might be time to ask them if they want to join a team.

Most children who have any kind of interest in football would like to be part of a team at one stage in their early life. Never, though, just assume your child wishes to join. Find out what they want to do when it comes to playing football. Do they enjoy it enough to want to be part of a team with others? If so, you should do what you can to give them the opportunity they need to start playing this way.

It’s tough, of course it is. But if you focus on the above age group, you might start a lifelong love of the game for your child.

Read more about the benefits of joining a football academy