What are the differences between local and private soccer academies in the UAE? 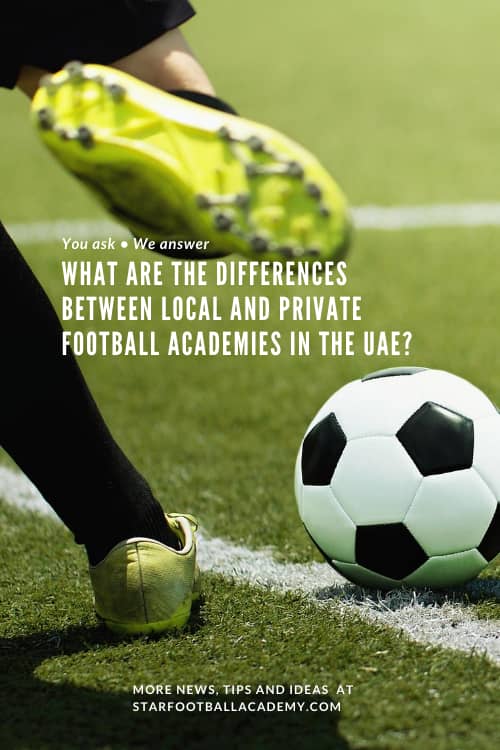 Whether you are a young player yourself or the parent of a young player in the UAE, you might wish to get involved in soccer. As the global game, the UAE has a long and passionate interest in the sport and, today, it’s the national sport of the country. The Middle East has become fascinated by soccer, and with that in mind you have many young boys dreaming of living up to the careers of their idols.

That is why many people today are looking to join an academy, and many academies today exist. However, like many other nations you will find sporting academies across the UAE in various forms. The two major forms of academy that you get today are local UAE football clubs, and private football academies.  What is the right option for you?

Typically, private football academies have become the go-to choice for those who are looking for a defined coaching experience. They are designed to give young players the chance to develop as players and in time be discovered by professional football clubs. They will be given the chance to join the academy and play, develop, and grow through various forms of tournaments and matchdays.

Over time, players can then be discovered and picked up both by football clubs based in the UAE and teams from abroad who watch the academy system in the UAE as it grows. However, there are some pretty major differences in how a local club academy and how a private academy interacts with the youngsters of today. Let’s take a look so that you know what to look out for when choosing an academy.

Let’s evaluate the difference between a local club academy and a privately-funded sporting academy.

Typically, a local club academy is going to be interested in picking out the best young talent only. They are not interested in helping young players play and develop for the fun of the game or for their personal growth. For a club academy, the aim is for every player they bring in to potentially one day push for a place in the first team of the actual club itself.

With a private academy, though, things tend to be much more relaxed in general. They will be happy to take on a child or any ability level. Even children who have no potential to make it as a player professionally can join a private academy. This offers a chance for anyone to play and improve, even if it’s just for your own self-belief and personal fitness.

Eligibility, then, is the most critical dividing factor between local clubs and private academies.

While a player who is playing as part of a local academy club will be ‘paid a salary’ as form of token gesture, you have to pay to be part of a private academy. This is an academy program that is going to help those involved to get fit, get rid of excess weight, and to be developed as players.

This is not to say that those at clubs receive better training, it’s just that the aim is purely to try and mould professionals. In a private academy, many children do it purely because they love football and wish to play at an amateur level to a higher standard.

The pressure is a huge part of the process, and players joining a local football academy are under pressure from day one. You will not be given the same chance to grow and make mistakes; it’s far more like the ‘sink or swims’ environment that one would find in a professional football club.

They want to look performance and progress of the player as much as the results. In a private academy, results are often secondary here.

A big part of the difference also stems from training times. With a local club academy, you will be following all UAE school and government times. This means that you can often miss out due to holidays and other events, which can inhibit your training consistency.

At local football academies, the standard of coaching is improving all the time. However, one issue is that many of the coaching programs are universal and thus aren’t tailored to bring out the best in each player. It’s a one-size-fits-all approach, which in football is often not the best approach to help a player find their best level.

By contrast, then, the coaching standard at a private academy often seems better. For example, the Star Football Academy is known for using both e-learning and bespoke development for each player. This allows players age, physical skills, football experience, technical capacity and tactical knowledge to be taken into account. The result is a much more focused, personal training experience.

With easy access to online review of all progress made during a private training program, it’s much easier to grow. Instead of the whole team being expected to move at one consistent pace, private academies appreciate that some players will develop faster than others.

Add in the monthly assessments and regular tournaments, and players tend to get a much more rounded, football-like experience through a private academy. All without the pressure of having to win every week.

If you are interested in getting involved with football, then, you should consider your options before deciding for certain. There are key differences between local and private soccer academies; you just need to work out what suits your present experience best.