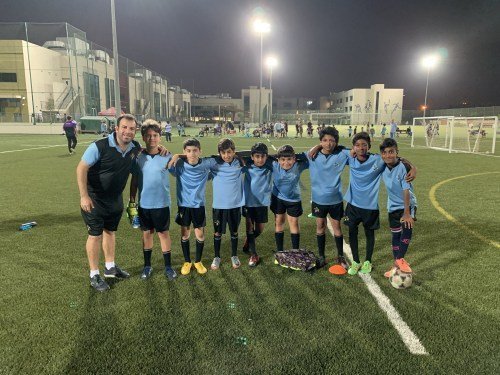 How do you decide which football training academy is suitable for your child? Do you want your child to play friendly games or just train football? We believe that successful football coaching in Dubai should always focus on the learning process and less concern over the result. Nevertheless, we strongly believe that competition teaches us to bring our best effort. Knowing that it takes all eleven guys on the field to think as one in order to win the game, our football training academy always insists on the team playing and competing together rather than just winning.

Our football training academy offers its players various opportunities for playing games internally and with other clubs. Every week we either participate or organize a friendly game with another club or school and all our players have the opportunity to play regardless of abilities.

Our football coaching in Dubai and Sharjah incorporates playing games for real life experiences in reinforcing tactical skills and problem solving in technical aspects of the game. Players develop a better understanding of the games when they are working together in a team and applying their knowledge and understanding during the game.
During games, the Star Football Academy coaches concentrate on the skills and gameplay rather than the score and reflect with the players. Reflection is part of our program as players can reflect on their strengths and the skills they may want to set as a goal for themselves.

Do you have what it takes to be a Star?

For players that have advance skills, there are tournament and league games available by invitation as well. Playing games in tournaments and leagues are also important and players get the opportunity to be in a process of making it through the ranks. The Star Football Academy has made many local and international partnerships that support playing games on a regular basis. Start Football Academy also focusses on the community aspect of playing games as payers have the opportunity to show their friends and family the skills and understanding they are continually developing. Playing games builds trust within the team creating a sense of belonging and achievement. Having this supportive environment gives the players courage to take risks, try new skills and to challenge themselves.
Read more: Why are we the Best Football Academy in Dubai?
Playing games is also part of the session structure as the end of each session there is a group game. These session games are to practice and reinforce the sessions skills focused on in the session. The coach is able to get a good evaluation of each player’s understanding and support the player if needed.
We believe that this approach to football coaching in Dubai allows competitive sports such as football to help build children’s self-esteem, confidence and social skills and motivate them to excel academically as well.
Read more: Star Football Academy values | Locations |Upcoming games