7 Reasons why Football training is Important for kids 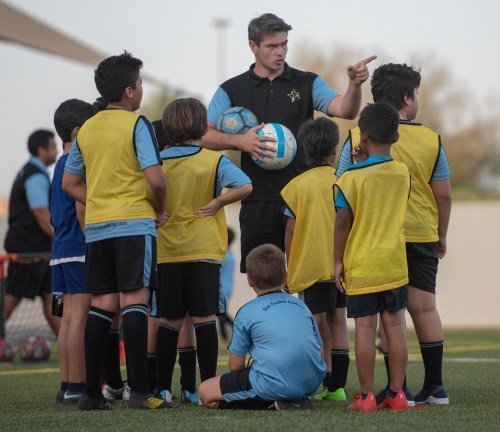 Football training important for kids cuz it not Just about any sport or physical activity will help to develop physical literacy and the movement skills of your child. However, if you had to pick one sport to choose that developed the most skills and capacities, it would have to be Football. Even at the basic levels of development, physical literacy includes an extensive list of fundamental movement skills. The most essential of these that are generally accepted are running, jumping, throwing, catching, kicking, hopping, skipping, galloping, and dodging. These skills are based in turn on a foundation of physical capacities called the ABCs of movement: agility, balance, coordination, and speed. Star football training cover all these aspects in the football classes in the three locations.

Throw into the mix some spatial orientation skills and cognitive decision-making, and you have most of what makes up physical literacy.

Agility, balance, coordination, and speed exercises during football training are closely connected to the development of the central nervous system (CNS) in early childhood. The bodies of preschool children are silently waiting for precisely the kind of stimulation that will get the CNS preparing and adapt for the ABCs. As it happens, quick changes of direction and diversity of movement are intrinsic to soccer, so the simple act of playing the game provides the perfect stimuli to help children to develop these capacities. You can almost hear each child’s CNS saying: “Gee, thanks for registering me in soccer!”

Football training involves a lot of running. And best of all, for children, will provide exactly the variation of running they need: short distance sprinting followed by short time intervals of recovery.

When your child plays soccer during the game or training drills, there are a lot of other players on the field who are excited to run and play the ball. Consequently, the game demands that kids do a lot of jumping and dodging to evade opponents. It also requires that they hop, skip, and even gallop at times as they change speed and adjust their stride to avoid players and change direction.

Hold on. When are you allowed to use your hands in football? Well, for starters, every time the ball passes out of play on the sidelines. Play restarts with a throw-in, and every player needs to learn how to do it. And goalkeepers, a position just about every child plays at some point during their early years in the game, are consistently catching the ball with their hands and passing it to teammates with a baseball-style throw.

One of the less discussed aspects of physical literacy — but integral to throwing and catching as well as striking something with a bat or racquet — is the ability to track the movement of an object (e.g., ball) as it travels through the air. Your child’s ability to use her eyes to track movement and estimate speed and distance does not “just happen”. As with movement skills, it needs to be developed through real experience and practice. Football provides plenty of experience as the game constantly challenges players to gauge the speed, distance, and trajectory of the ball.

The ability to “read the environment” and respond with appropriate decisions is another element of physical literacy that is often overlooked. In the context of a sport such as Football, it is deciding to pass the ball to a teammate running to open space, or shooting at goal when the goalkeeper is out of position. The game consistently creates new cognitive challenges where players must gather information from their physical environment, analyze that information, and then execute an appropriate physical response.

Not much needs to be said here. There is a lot of kicking in football training as our focus at Star football Academy for the kids to touch the ball as many time as they can. The range of kicking techniques can eventually become remarkably complex as players develop in the sport. (For instance, according to the studies, players in Hungary used to be expected to be able to play the ball with eight different surfaces of the foot. How many of us can even identify eight distinct surfaces on one foot?)