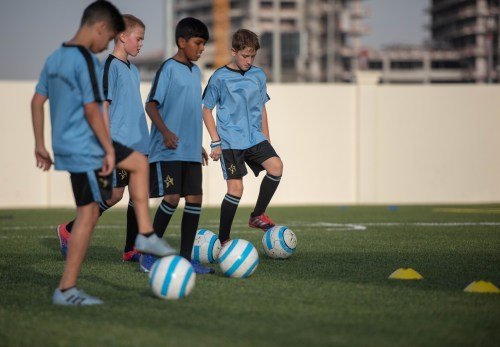 Teaching football for kids at Star Football Academy with E-Learning facilities, which means your child will be able to see the lessons before training with our video library, communicate with the coach after practice and get a performance report every three months about the progress of your child.

Star football Academy has an international community with many players from various nationalities and backgrounds. Our philosophy in football for kids are values of fair play, showing respect for everyone as well as treating everybody as equals. Open commination between players, coaches, and parents is very important and is regularly. We believe that all players can succeed in football, and we have a program that differentiates the children according to their age and level. Our Coaches are qualified from the U.K Football Association and have international experience from around the world, including the UAE. All players are also accepted and encouraged to play in regular friendly games, leagues, and tournaments, as we focus on the performance of skills, learning rather than the results. We are focused on giving all players the experience of playing games, which helps in motivating players to set goals and achieve the full potential.

Call Now Button
We use cookies to ensure that we give you the best experience on our website. If you continue to use this site we will assume that you are happy with it.OkPrivacy policy
Go to Top