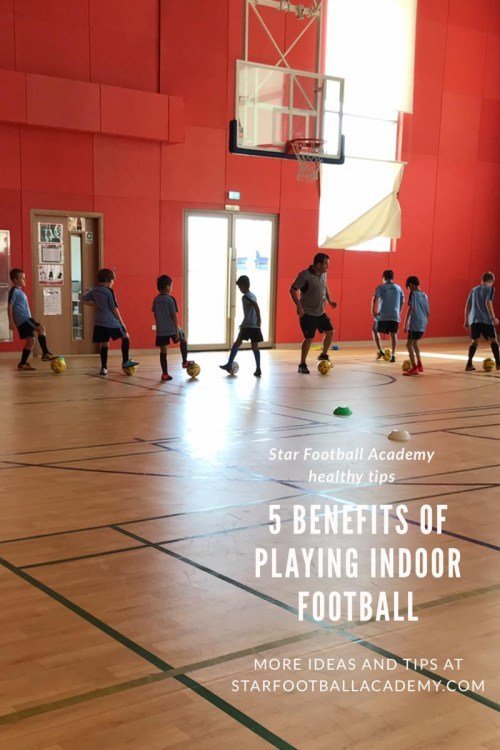 As the weather gets hotter in the UAE and especially during the long summer break, it is crucial to keep our children physically active, healthy, and fit. Anees Makrous, founder and Head Coach of the Star Football Academy, outlines five main reasons why grassroots coaches should take children indoors to play during the summer months.

There are many reports about the role of indoor football classes for kids  has played in the development of many of the world’s top players, such as Marcelo, De Bruyne, Neymar and Ronaldo, to name a few. And this is no surprise as the significant constraints indoor football puts on players are also the reason why they get better at it. Futsal can help players develop their ability to play in tight situations, pass more accurately 2vs.1 and 2vs.2, as well as become better at quick decision-making, and understand tactics.

One of the reasons, indoor football is harder than just playing outdoors, is that the ball is much faster and requires constant action from the players as well as greater ball control. When playing indoor football, players cannot merely stand at the back and passing the ball but have to stay involved all the time. The game encourages players to move the whole time as the ball is continually in play and requires swift actions. With only a few breaks in play, indoor football is developing not only better players but also better athletes.

Another great benefit of playing indoor football is the new challenges it offers for both children and coaches and the unique experiences that the players will face when playing in more constrained environment. It is also up to coaches to make sure that their lessons are developed in a way to improve the overall balance and coordination of the players by playing to the lines. At Star Football Academy we have experience qualified football coaches that understand how to use the indoor football environment to strengthen players core strength, balance and coordination to improve their skills.

When playing indoor football, it is essential for players to play within the demarcated area, which assists in better ball control and creates a more challenging environment. Every touch of the ball has higher repercussions as the playing area is smaller hand players are closer to their opponent’s goal, allowing for more goal scoring opportunities. The weight of the ball is heavier as well, so players now need to follow through with their passes and make sure it’s even more accurate than ever.

Due to the quick nature and high intensity of the game, the players on the court regularly swap with those on the bench. Young players can be challenged to organize this process themselves, which can have a positive social benefit. Additionally, when they are on the side of the court, they’re observing, learning and developing their understanding of the game. Don’t think that the resting players aren’t involved. If the intensity of the practice is right, the players will need the rolling substitutions to give them a chance to rest and take in what they’ve learned, go back and put it into practice.

Indoor football offers various types of physical contacts between the players and us as coaches have the benefits of creating personal contacts by making spaces smaller and closer together. It is an excellent way for players to develop their skills of shielding and to protect the ball. Read more about 5 tips for prenet when choosing football academy

READ MORE: Should we stay active during Ramadan?

Call Now Button
We use cookies to ensure that we give you the best experience on our website. If you continue to use this site we will assume that you are happy with it.OkPrivacy policy