Balancing between sports and studying 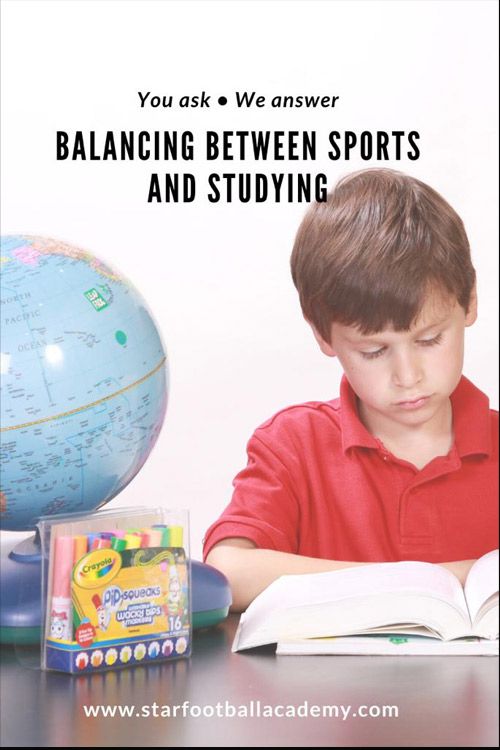 For any parent, one of the most common problems that you can have is finding a balance between fun and studying. Your child might want to spend all day and night outdoors with their friends, playing soccer until the sun goes down. And while that might be useful, as you know your child is socially and physically developed, it’s not necessary. While you should always encourage your child to take part in social and sporting events, you also want to encourage them to study equally. That’s why balancing between sports and studying is so increasingly important.

So, the first problem you have is probably trying to convince your child that they should stop playing sports so much. In a world full of poor dieting decisions and lazy lifestyles, it seems odd to complain about your child playing sport so much. Especially if they show a desire and an aptitude to make a living out of the sporting world.

However, the modern athlete is academically smart as well as physically in condition. The modern sporting world requires players to think with their brain as much as their bodies. With that in mind, encouraging your children to work on their problem solving, cognitive control, and communication is important.

If your child typically fights back because they feel like they do not have to study due to athletic desires, show them the reality. Make them realise that academic performance is a major part of being a successful athlete in 2019 and beyond.

Help them appreciate the balance

While your child might think it’s not the case, you have to show them examples of why academic performance matters. For one, many football academies and football coaches will not take on a student with poor academic performance. You can have all the skill and quality in the world; if you cannot show academic skills, it can be hard for an academy to input the needed resources for you.

Show them the results

A big part of convincing your child to go along with the benefits of academic study is to show them the results. There are examples in every sport of people who never stuck in failing due to that lack of desire. Show them that the skills they need to be an athlete go far beyond their physical stature. And also provide them with examples that the academic learning you are encouraging leads to long-term results and benefits for your child.

If they are willing to put in the work and the effort, they should be rewarded for doing so. Show them not only the pitfalls of failing to get involved, but the long-term benefits of getting involved. If you are someone who thinks its hard to get your child learning on a regular basis, encourage them with stories of other athletes who relied on academics.

You have no doubt heard the old adage that sport is sacrifice. For everyone who makes a living from the sporting world, the work that has gone in to get there is incredible. It’s rare that someone makes it in the sporting world without showing academic desire and ambition, too. Sometimes, we need to accomplish something we’d rather avoid to improve at our passions.

If you feel this is something that you worry about regarding your child, talk to them about it. Show them why improving their academic performance and behaviour will impress their football academies as much as development as a player. Becoming a better academic shows personal development and growth; in the world of sports, that’s going to become increasingly important.

That is a good reason to show your children why they should not put down their tuition and to keep in at major studies such as science, history, mathematics, and languages. Not only will it help them to get used to the idea of working hard to achieve what you want, but it will show any coaches they have that your child intends to improve in every way, not just at their chosen sport.

read more 7 reasean why football training is important for kids

Lastly, it’s important to show your child that the world of sport is a very, very small place. For everyone who ‘makes it’ at their chosen sport, many fall by the wayside. It is though important ot show your children that they can be something other than an athlete.

Say your child loves soccer. Academic learning mixed in with their sports training in their spare time should lead to a happier balance. They might not have the skills or qualities to make it as an athlete themselves. But, if they put in the effort now academically, could other sporting roles be open to them?

For example, you could get involved in football academies, or football analysis. You could become a tennis coach. You could get involved in just about any kind of sporting discipline that you choose. Show them that sport does not simply end at the idea of being an athlete. Your child is presently being coached by a football coach: why could they not, one day, be a coach themselves?

Remove the need for your child to see a barrier about becoming involved in the world of professional sport. This means they are less likely to see sticking in at sport a their sole means of making a living, instead blending the best of sport and the best of academic coaching to develop.

This gives your child a better perspective on both what is possible, and why education isn’t useless for those with athletic desires.